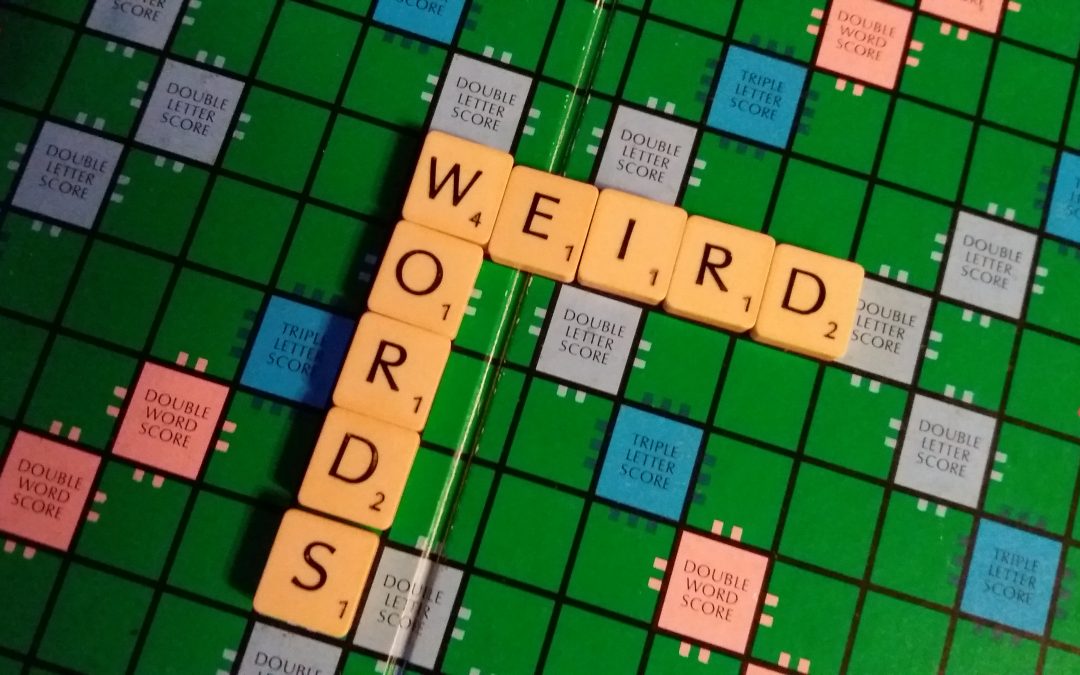 Some words behave weirdly – and not just the fancy ones that few people understand. Here’s a collection of the first few that sprang to mind (as seen originally on my Facebook page).

Weird Word of the Week #1: COMPLIMENT (and related words).

Weird because… It often gets mixed up with COMPLEMENT.

You pay someone a compliment. It means you say something nice about them.

Examples: ‘He was flattered by her lavish compliments.’  ‘The Board complimented me on my presentation.’

If you compliment someone, you don’t expect to get anything in return; your compliment is given freely. If something is complimentary, it’s either polite and admiring, or it’s free. So this is the spelling you need if you are talking about a gift. But if you mean it’s free, why not say so? ‘Free’ is short, easy to spell, and everyone knows what it means.

And ‘complement’ with an E? It come from the same Latin root, but these days the two words don’t mean the same thing. Broadly speaking, a complement completes something (spot the similar spelling). So if you add something, or put things together, or match things up, those things complement each other.

Examples: ‘The bath mats complemented the wall tiles beautifully.’ ‘We didn’t have a full complement of playing cards.’

If something is complementary, it goes with something else – either to match, or to create something complete. It might be free too. But I wouldn’t bank on it.

Weird Word of the Week #2: QUITE

Weird because… 1) It can have different meanings; 2) Researchers say it’s dying out.

How do you use the word? Can you remember the last time? Why did you use it? The chances are that it was to soften or dampen a judgement on something. For example, I told a client I’d found their wording ‘quite difficult to understand’.

It means ‘fairly or moderately’. We use it to hedge our bets – to avoid being too definite or too harsh.

For complicated social reasons, words like ‘quite’, ‘rather’ and ‘fairly’ tend to be used more by women than men, and more in the UK than the USA. But now, experts from the University of Lancaster say such words are used a lot less in the UK than they were 20 years ago. We are becoming more direct, in line with Americans.

The dictionary also gives another meaning – ‘absolutely or completely’. It sounds old-fashioned now, but you could say something is ‘quite dead’, ‘quite awful’, ‘quite right’ or ‘quite brilliant’. Here, it doesn’t mean something is only a bit dead/awful/right/brilliant – it’s being used for emphasis. This usage does seem to be on the way out.

So will ‘quite’ disappear from our language? That’s possible, but as English has so many words that mean almost the same (rather, a bit, fairly, pretty…), it clearly has an important social function. The way we use it is likely to carry on changing, though.

FINAL TIP: Leaving out ‘quite’ gets you to the point more directly and has more force. Only you can decide if that’s a good thing.

Weird because… It gets mixed up with ITS.

This is probably the most common mistake in writing. The two words do mean different things.

IT’S with an apostrophe is short for ‘it is’ or ‘it has’. There is never any other meaning.

Here is the simplest way to know which spelling to use: If you find yourself using IT’S with an apostrophe, try saying your sentence with ‘it is’ or ‘it has’ instead. Does one of those make perfect sense? Then you are right – stick with IT’S.

Does it sound like rubbish? Then you need ITS without an apostrophe. (Explaining all the possible uses of this non-apostrophe version could take a whole blog – watch this space!)

FINAL TIP: That was the only tip you’ll ever need.

Weird because… Sometimes the maths gets in the way of clear understanding.

I’ll start with the way it’s written: you might see it as one word (percent).  In Britain, the two-word version is preferred, and in the USA, one word. But as long as you’re consistent, neither is wrong.

Of course, you could just use the symbol %. (There is an opinion that using the symbol looks more official and implies more accuracy – what do you think?)

Some people get very annoyed by sports or games contestants saying they ‘gave it 110%’. Not everyone understands why that can be irritating. So here’s where language meets maths…

Per cent means ‘out of 100’. So 100% means 100 bits out of 100, which means the whole lot. Whatever you’re ‘giving’, it just isn’t possible to give more than the whole lot. (Of course, most people realise that ‘110%’ is just a figure of speech to emphasise extra effort – but it’s definitely informal, and should probably be avoided in writing.)

If the original amount trebles, then it has increased by 200%, and you have 300% of what you had to start with.

I make no apology for writing about maths here – maths is about logic, and logic needs words to express it. Little words like ‘of’ and ‘by’ carry a lot of meaning.

Percentages are frequently used in news articles or business reports and can lead to confusion. (Some cynics might say that’s on purpose.)

FINAL TIPS: 1) Don’t be bamboozled by people’s use of PER CENT (%) – be prepared to think about what they really mean.

2) Unless you are writing about finance or statistics, consider whether you need to use PER CENT (%) at all. It might be clearer to use words such as double, treble, quarter, two thirds, to avoid putting people off.

Do you have a language query? Just send me an email, or ask on Pernickety Kate’s Facebook page.

Are you wondering whether your writing could benefit from editing or proofreading? Take advantage of a friendly Free Appraisal.